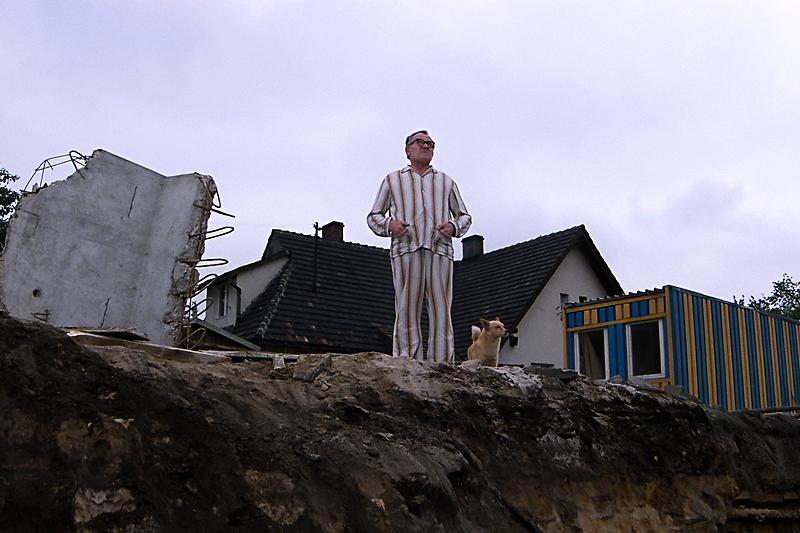 THE BEADS OF ONE ROSARY

The 1970s in Poland marked the beginning of a new era. The power is overtaken by Communist technocrats. Western products enter the country: Marlboro and Coca-Cola, Fiat and Berliet rule the streetscape. The country is being modernised – and the loser of this is the hundred years old tradition and culture.

An old mining settlement is to be bulldozed. It is to give way to the prefabricated buildings that are shooting out of the ground like mushrooms. But Habryka, a pensioned miner, refuses to leave the house, where his father died, his sons were born, and he survived two world wars. His family and even the directors of the mine try to convince the old man to leave his house – without success. When the bulldozers are at the door, Habryka says that he has laid dynamite in the foundations and threatens to blow himself up. Then there is the turning point, but still it doesn't bring the longed-for happiness to the old man.

In contrast to the first two films of Kazimierz Kutz’ “Silesian Trilogy”, the final part is set in the recent Polish history. His lively polemic with modernity is a true, although ironic, affirmation of the Upper Silesian home. KM

Kazimierz Kutz - born in 1929 in Katowice, Poland. He studied at the Film School Łódź and worked as an assistant director for Andrzej Wajda. In his more than 20 feature films, which he realised, he often focuses on his homeland Silesia. He has also staged numerous plays, is a writer and was a politician in the Polish Senate and Parliament for several years.

Movies
KRZYŻ WALECZNYCH (1959)
SÓL ZIEMI (1970)
PERŁA W KORONIE (1972)
ŚMIERĆ JAK KROMKA CHLEBA (1994)
SŁAWA I CHWAŁA (1997)
Back to the section:
Cookies make it easier for us to provide you with our services. With the usage of our services you permit us to use cookies.
More information Ok