Dubioza Kolektiv is the official opening band of the 30th FFC 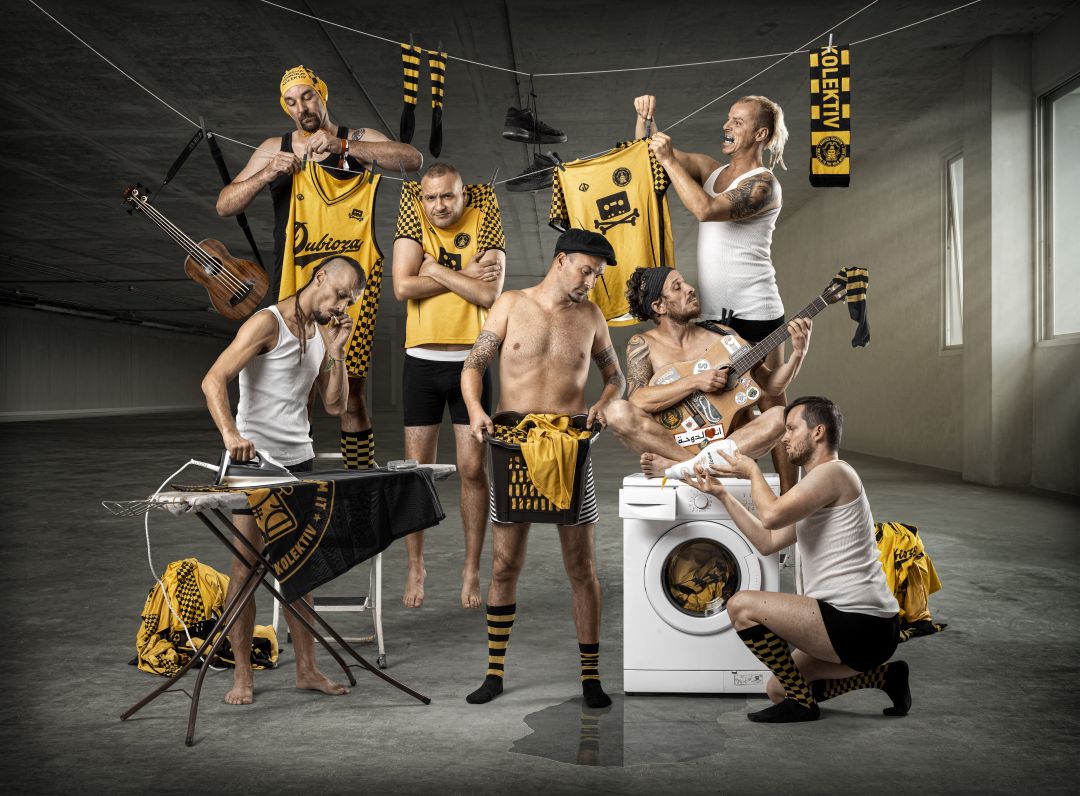 Around half the world with quarantine shows.

With cinematic insights from Eastern Europe and many international guests, the FilmFestival Cottbus is a cultural melting pot - just like the Official Opening Band of the anniversary edition: Dubioza Kolektiv convinces with songs full of power and positive energy. The band with Bosnian-Slovenian-Serbian-Croatian roots finds its musical influences all over the world: ska meets punk, reggae, electronic and hip-hop. Local Balkan flavours refine their music to the typical Dubioza Kolektiv sound. We talked to bassist Vedran Mujagić about the band's "Quarantine Shows" among other things.

Since March you have been playing the "Quarantine Shows": live via Facebook, YouTube and Instagram from up to eight locations in three countries. Mr Mujagić, for our opening gala Dubioza Kolektiv will play in "Quarantine Show" style. Due to Corona unfortunately not live in Cottbus. How do you prepare for such a virtual concert?
Preparations for a regular real-life show usually consist of backstage warm-up party with excessive amounts of refreshing alcoholic beverages. As you can imagine, preparations for online shows are much less interesting and nobody will write about them in some future rock autobiography.

Why did you invent the "Quarantine Shows" and how do you experience the feedback of the audience in these shows?
Idea to create Quarantine show came up in March 2020 in the first days of global lockdown. It evolved from the idea of creating live music experience for the audience worldwide - since live music industry came to a stop due to the COVID-19 pandemic and this was the only way to keep people, who were stranded in their homes, entertained.

We decided to do full, loud, energetic live show so people can sing-a-long and dance with us and everybody gets a place in the virtual first row of our concert. The most important thing for us is that our web show gives people some comfort and at least for a moment, they can feel like everyone is together at a concert. Thousands of comments received real-time during the show give us a feeling of live attendance and interaction.

In this year's programme we will be showing the film ŠTA TEBI ZNAČI BIH? | WHAT DOES BIH MEAN TO YOU?.

What does Bosnia and Herzegovina mean to you personally?
For Bosnian part of the band (we also have members from Slovenia, Serbia and Croatia) - it is a place we call home. It is a beautiful place with amazing nature but, unfortunately, in large part inhabited by people who do not appreciate this fact too much. Our country is being deliberately destroyed, its resources abused and mismanaged. Governments on all levels bear the largest part of responsibility for this destruction but citizens are not completely innocent as well. Corruption is a way of life and not some isolated incident that can be easily amended. All of this creates atmosphere of hopelessness and despair and as a result - people are leaving en-masse to live abroad with little or no intent of returning to Bosnia. If it is not for excellent food and endless coffee drinking sessions - no-one would be living here anymore.

What does your homeland need the most for a prospering future in your opinion?
There is not one easy answer to question how to make things better in Bosnia. We are screwed on so many levels that the list of things to be repaired would be extremely long and tedious one to read.

Why is a "pro-EU" attitude so important for you?
Vague and distant promise of European integrations and future EU membership are currently the only barely working “carrot and stick” mechanism that force our political elites to implement at least some of necessary reforms in exchange for new loans and aid money. So even being painfully aware of many shortcomings of EU - we still don’t have any better and more realistic alternative.

After 17 years (and a lot of work of course), you are quite popular not only in the Balkan region, but all over Europe. In your latest album #fakenews (release: January 28 2020) you are singing in English, French and Spanish. Previous albums and colaborations also offer songs in Italian, Punjabi and of course Bosnia.

What does it mean to you to write and sing lyrics in your mother tongue?
Would it mean a loss of identity for you to sing just in English or another popular lingua franca and not in Bosnian anymore?
From the early on, we started writing both songs in Bosnian and in other languages and we do not plan to stop with this in the future to suddenly become mono-lingual band. It is very helpful in creative process to go out of your comfort zone, such is your mother tongue, and switch to foreign language. Your thought paths are different in foreign language and it influences the creative output. While in your own native language you use a lot more stylistic figures and metaphors, in foreign language you deliver your message as bare and as simple as possible. And this forced minimalism sometimes gives great results. In practical terms this means that we rely a lot on help from Google Translate…

Due to your album release in 2020, there should have been many live events this year, such as tour concerts, festivals etc. Where can we hopefully meet you live in 2021? #nofakenews
Since our only show in Cottbus was 13 years ago at Cottbus Film Festival, we hope that after this year’s virtual show we will be able to come for real for some future festival editions. If it is not for pandemic you would have had a chance to catch us somewhere at our tour in Germany this autumn. This tour is postponed for the next year (2021) with new dates in April. So stay tuned - we will (hopefully) come soon!