Four LUBINAS for Polish cinema at the 27th FilmFestival Cottbus 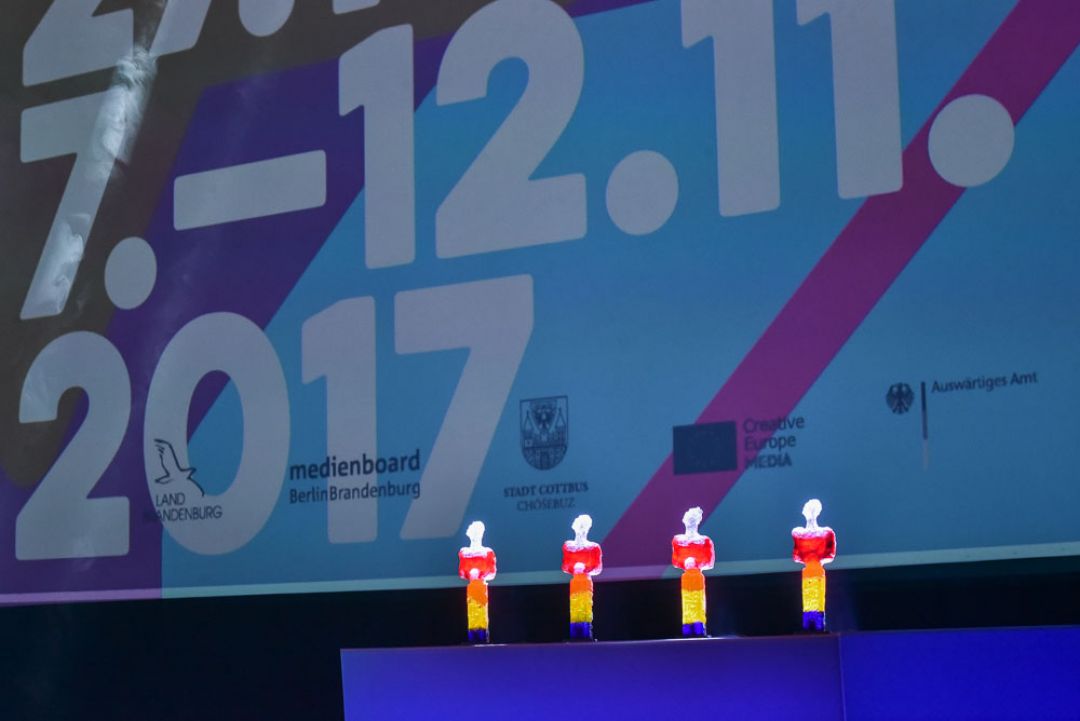 The FilmFestival Cottbus (FFC) came to a glittering conclusion on the evening of 11th November at the Stadthalle Cottbus with the awards ceremony of the 27th edition that posted record attendance of over 21,000. Polish filmmakers and actors, in particular, had every reason to rejoice. The director Anna Jadowska emerged as the triumphant winner of the Feature Film Competition with her poignant drama WILD ROSES | DZIKIE RÓŻE. Her lead actress Marta Nieradkiewicz impressed the jury and received the LUBINA Award for an Outstanding Actress. I'M A KILLER | JESTEM MORDERCĄ by Maciej Pieprzyca won the Special Prize for Best Director, and his lead actor Mirosław Haniszewski was presented with the LUBINA Award for an Outstanding Actor. In addition to the four prestigious LUBINAS, the FilmFestival Cottbus awarded prizes totalling almost € 80,000 in value.

„The festival programme has once again demonstrated the artistic and thematic diversity of East European cinema. Polish cinema has traditionally been one of the strongest film industries, this year's prize-winners confirm this. The jury has thus also rewarded the courage of Polish filmmakers in tackling a wide range of subjects. I hope that Polish cinema will continue to have many voices and thus make a significant contribution to the European idea“, comments Bernd Buder, programme director of the FilmFestival Cottbus.

The Main Prize for the Best Film of the 27th FilmFestival Cottbus, with a purse of € 25,000 and donated by the Gesellschaft zur Wahrnehmung von Film- und Fernsehrechten (GWFF), was won by WILD ROSES | DZIKIE RÓŻE by Anna Jadowska. A gripping psychological portrait of a young overstrained mother who sees her life slipping away in the Polish provinces.

The International Festival Jury, consisting of Danilo Bećković, Yevgeny Gindilis, Prof. Dr. phil. Ursula von Keitz, Marcin Pieńkowski and Elīna Vaska, were in agreement: „We chose this film because it gives the main female figure a voice. A voice which reaches the depth of our hearts. We admire the combination of visual style, amazing sound and editing, which makes watching this film an almost physical experience.“

Moreover, the jury recognised the performance of Marta Nieradkiewicz, the lead actress of WILD ROSES | DZIKIE RÓŻE with the Award for an Outstanding Actress, sponsored by the City of Cottbus and with a purse of € 5,000. The work by the triumphant winner can be admired by the festival audience on Sunday, the last day of the festival, at 20.00 in the Stadthalle.

The Special Prize for Best Director, with a purse of € 7,500 and donated by Rundfunk Berlin-Brandenburg (rbb), went to I'M A KILLER | JESTEM MORDERCĄ by Maciej Pieprzyca. „The director uses a lush and diverse range of artistic techniques and leads us carefully through a suspenseful and elaborated plot. However, his film language always remains in the service of creating a thorough and disturbing psychological portrait of the main protagonist. The Special Prize for Best Direction is awarded for creating a visually stunning film that seamlessly develops from a crime story into a deep and thoughtful analysis of the corruption of a human soul“, the jury said in its motivation.

The jury also recognised here the performance of the lead actor Mirosław Haniszewski and presented him with the Award for an Outstanding Actor – with a purse of € 5,000 and donated by the Sparkasse Spree-Neiße.

The Short Feature Competition saw the film ATLANTIS, 2003 | ATLANTÍDA, 2003 by the director Michal Blaško beating off the competition to take the top prize. He won the € 1,500 Main Prize, donated by Druckzone, Cottbus. The jury – consisting of Emilio Sakraya, Svenja Böttger, and Samaya Asgarova – gave the following motivation: „The winner of the Best Short Film Award shows social-political issues through the relationship between the two protagonists. The camera not only guides us through the story, but also takes us along. The director gives the actors time to act and the audience time to understand.“

Director Ruslan Bratov garnered the Special Prize, with a purse of € 1,000 and donated by Druckzone Cottbus, for MERRY-GO-ROUND | LALAY-BALALAY.

Pupils from Poland, the Czech Republic and Germany made up the six-person jury for the U 18 Youth Film Competition. They chose the biopic BREAKING THE LIMITS | NAJLEPSZY by Łukasz Palkowski as the winner. The director Łukasz Palkowski received the € 3,000 Prize for the Best Youth Film, donated by Lausitz Energie Bergbau AG (LEAG). The jury commented about its decision: „Every day is a fight. We fight for love, our family and our dreams. We make decisions, we make mistakes, but the most important thing is: we never give up. We have chosen BREAKING THE LIMITS by ŁUKASZ PALKOWSKI for its authentic and touching story, for having the opportunity to follow someone's failures and triumphs, and seeing a boy become a man and finally a champion. He struggled, he fought, and he won.“

Other prizes were awarded during the 27th FilmFestival Cottbus: the DIALOGUE Prize for Intercultural Communication, donated by the Federal Foreign Office with a purse of € 3,000, went to the director Đức Ngô Ngọc for his documentary FAREWELL HALONG, which had its world premiere at the 27th FFC and could be seen in the Vietnam in Europe Focus.

The jury gave a Special Mention to SAMI BLOOD | SAMEBLOD by Amanda Kernell.

The Prize for the Best Debut Film, donated with a purse of € 3,000 by the Brandenburgische Technische Universität Cottbus-Senftenberg and the Film University Babelsberg KONRAD WOLF, was presented by the jury to GOOD MORNING | BARI LUYS by Anna Arevshatyan, her brother Eduard Arevshatyan accepted the award.

The decisions by the FIPRESCI jury and the Ecumenical Jury for WILD ROSES | DZIKIE RÓŻE added to the long tally of prizes for director Anna Jadowska.

BAREFOOT was particularly well-received by the festival-goers. The director Jan Svěrák was able to take home the Audience Award, donated with a purse of € 3,000 by Lausitzer Rundschau. The hit will screen at the 27th FFC on the final day at 12.00 in the Stadthalle.

The 27th FilmFestival Cottbus presented almost 200 films from 42 countries – including eight world premieres, 25 international premieres and 85 German premieres – over the course of seven days. The FFC reached a new record with over 21,000 admissions!

„We are very satisfied with what has been a wonderful festival week. The people of Cottbus have proven to be superb hosts. Moreover, our record shows that we have a place in the hearts of the people“, says FFC managing director Andreas Stein.

(about the previously announced special screenings)