From the region for the region - FilmFestival Cottbus presents in cooperation with Neisse Filmfestival the first film series in the framework of the Lausitz Festival. From 01 to 04 September 2021, the specially curated program will take viewers on an exemplary journey through the worlds of the partner festivals with 4 feature films and 4 short films.

Have you become curious? Then be there and enjoy the coordinated feature and short films, which will be screened in early September at Theater im Ohr in a cozy open-air atmosphere. Tickets can be found here.

The film series "Lausitzer Filmfestivals präsentieren" at a glance: 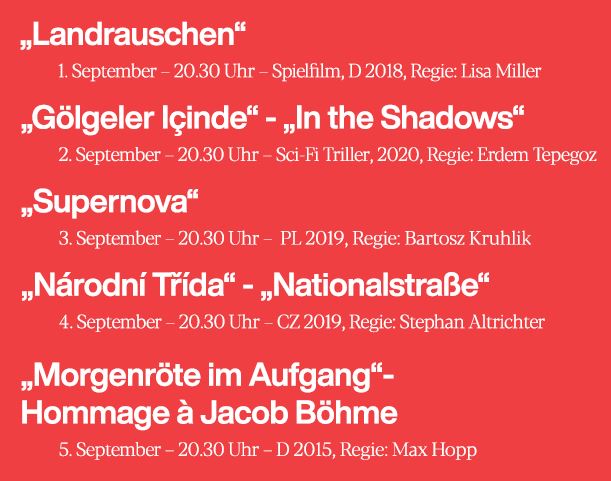 About the Lusatia Festival

From August 25th to September 19th, 2021, the second 'Lusatia Festival' will take place at 50 venues with nearly 80 events - theater, concerts, exhibitions, readings, talks, film screenings - in Lower and Upper Lusatia in the states of Saxony and Brandenburg. The motto of this year's program is "Zwischensamkeit". It was created in cooperation with regional cultural institutions as well as artists and brings together local cultural workers with international greats.

You can find more information about the Lusatia Festival at www.lausitz-festival.eu.